A combination of work and home commitments, together with time spent on “The State of Nature” work, meant that this was only my third visit of the month.

A Chaffinch and Song Thrush were singing near the Compton Road entrance to Compton Park. 2 Greenfinch and 2 Lesser Black-backed Gulls passed over the new school development.

A Blackcap was singing in the coppice by St. Edmunds and a Greenfinch was also in song at Eddy’s Alders. 40+ Woodpigeon were on the top playing fields by Meccano Bridge.

Whitethroat remain in situ at the Barleyfield, with activity at the Shrike Bushes, between Graisley Culvert and The Crossings (with a singing male), and at the top of the field within established territories, although no young were noted.

A Song Thrush was singing at Graisley Culvert, a Swift, Buzzard and 2 Goldfinch passed overhead, and pair of Blackcap were flitting around the NW corner, with young concealed in the hawthorns calling.

At the Crossings, 2 Chiffchaff were singing (one on the junction and another just North along the railway walk).
At Compton Rough, 2 Jays flew out from the central Crack Willows, where a Song Thrush was singing.

As I passed the Globe Buddleja’s I couldn’t help but notice that they were attracting dozens of bees on each bush, so I decided to track back later, when it had warmed up to take some photo’s.

At Compton Lock a Grey Heron and my 4th vocal Song Thrush, were noted and family party of at least 5 Coal Tit in the firs were a welcome sight.

At Prefab Weir, a Blackcap was singing by Graisley Brook, with a female nearby, along with a Moorhen and two chicks (about a week old). Nearby in the Crack Willows there was a large Tit Flock, holding over 25 birds, a mixture of adult and juveniles, with 4 Long-tailed Tit amongst them.

If ever you wander what you would get if you crossed a Magpie with a Moorhen, then the answer was on the bank of the canal, just North of Prefab Weir!!! 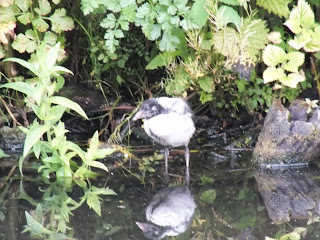 Another Moorhen with an advanced chick was South of Meccano Bridge. A Song Thrush was singing from the Main Paddock and a Goldcrest was singing beside the canal at the Academy. A Moorhen was quite comically trying to use a four-foot length of stem for it’s nest there, eventually giving up and frantically grabbing at nearby vegetation in frustration. One of the resident Mistle Thrush’s, settled briefly on a conifer top there.

My 6th and final Song Thrush was singing in the Middle Paddock.

At Newbridge only 3 Swift were present, which I put down to the time of day, but I was surprised to see 8 House Martin hawking just above the tree line, up and down the canal, eventually leaving to the North. 2 Coal Tit were calling from the gardens and 2 Goldfinch.

Having walked the whole section of the canal, without seeing young Mallard, Newbridge had two females with 5, and an amazing 11 advanced ducklings respectively.

A Blackcap was singing in the Middle Paddock and a Goldcrest was singing from the Railway Walk near the South end of the Main Paddock.

At Meccano Bridge, the first singing Dunnock and Chaffinch of the day were noted, as was a Great Spotted Woodpecker.

To the Barleyfield, where a Willow Warbler was calling from the annex with just 3 Swift, darting overhead. 14 Starling flew South-West off the meadow and another Dunnock was singing by Geoff's bench. A lone Stock Dove flew over - numbers have fallen now that the wetlands development area has been prepared for the pitches to be laid. There were 11 there on 5th June this year.

Before leaving I had a quick look amongst the flowers and found a few clumps of Goats-beard:

Now as the sun was warming, I headed back to study the bees at Compton Rough. A Coal Tit was calling from Alpine Way and a pair of Jay and Bullfinch flew over as I arrived at the lock area. A single House Martin headed South.

The Globe Buddleja bushes really are an asset to the valley: in Winter they support a Finch roost and at this time, they are a magnet to Bees. Since they are in the headlines for all the wrong reasons at the moment, I have provided a gallery just to show how spectacular and varied they can be. It also shows that just because, the scene on the bird front is quiet, there is still loads to record and enjoy in the valley:

I hope that the above bee gallery serves to show a few things. Firstly just how little we know about our natural world. I am so ashamed that as someone who has scoured the countryside, since I were knee-height to a Doberman, I am unable to accurately identify, record and spot a rarity amongst our local bee population. Secondly how hard must it be for our National Nature Organisations to monitor and protect nature with so few amateur naturalists about who can supply data, other than bird notes!!!! Lastly and most importantly, where is our next generation of nature lovers?? I have been walking the valley now for over three years, and have yet to stumble upon anyone younger than me recording nature (Although this blog has served to identify a few new kids on the block locally). Something has to be done to change this.

Whilst watching the activity, I noted a small Moth that was present in good numbers on the flowers. The Bees had put me into mini-beast mode and on the way back along the Rough towards the Barleyfield Crossings I found a nice little weevil, with an awkward long name!!!
Back to the Barleyfield and before long I noticed that the same small day-flying Moth was present in large numbers. Again shame!!, this undoubtedly would be an important pollinator and I hadn't got a clue what it was. Appeal to the Valley and wider World please....can anyone tell me what it is???

Back through Compton Park, where I learned that 3 Red Fox cubs have been raised near St. Peter's Playing Fields, and then stumbled upon another mystery, which echoed the findings of the "State of Nature" Report - there are hardly any fungi records being compiled and submitted by amateurs, which is alarming given the important role that they play in our eco-systems.

I do know that we do have at least 1 Fungi and funlady in our valley so please help identify what is probably a common lawn mushroom: 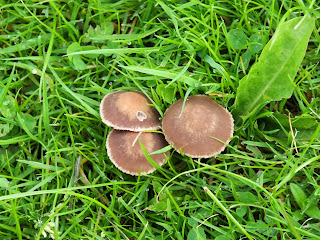 It's a sign as to how quiet birding is at this time of year is that my final request is for someone to help identify some poo!!!! This spraint or dropping was actually ON TOP OF the old bridge at Newbridge, ruling out a Bull-Terrier and was quite a size, appearing to be composed of vegetative waste. Any ideas??? 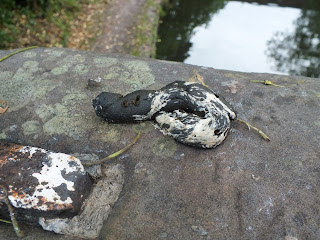 Incidentally, the birding wasn't bad - still managed to record 35 Species - not bad for a City Local Nature Reserve during the quite part of the year.

N.B: Please feel free to share by posting a comment. Your comments are not automatically visible, they come through to me for screening first, so any help, views or contributions are welcome.

Please do not pick wild flowers and do not take any wildlife away from where you find them (the weevil shown for example is almost exclusively associated with nettle beds). Thank you.