Robins join the hit list & back in the valley having an Owl of a time!

A few challenges in the health department followed by a backlog of commitments has kept me so near yet so far from Geoff's seat at TheBarleyfield!!

However I did manage to get down for the first time at the start of the month and boy did it feel good!

Nature has an amazing habit of creating a bond with you and the more you spend time enjoying the beauty and wildlife on a patch, the stronger this bond becomes. On Sunday 4th May I took a journey South from Compton Park down to Castlecroft canal bridge on a beautiful evening. It felt so intoxicating and everything felt magnified as I was drawn to all that moved or caught the eye as I got back up to speed with the valley.

At Graisley culvert 2 Chiffchaff were singing along with a Whitethroat and a Blackcap.

"Compton Rough" near the lock was looking all the better for the scalping last year and it was great to see a Whitethroat performing it's display song flight from the Globe Buddleja there. A pair of Goldfinch were nearby.

South of Compton Road there were plenty more Common Whitethroat with birds singing at The Sandfields, Turners Field and Wightwick Fields. Pheasant seem to have drifted North into the Nature Reserve this year with birds calling from Wightwick Lock, Wightwick Fields and the paddocks just North of Castlecroft canal bridge.

The following morning, I was still intoxicated so wrapped up for a dawn circuit of the mid-section from Compton to Newbridge, taking in Compton Park and the Barleyfield.

I was rewarded with a singing Garden warbler which, though distant, allowed me to get a poor shot (they all are! - only just worked out which way round to point the camera!) as it sang beautifully from the top of the Barleyfield. 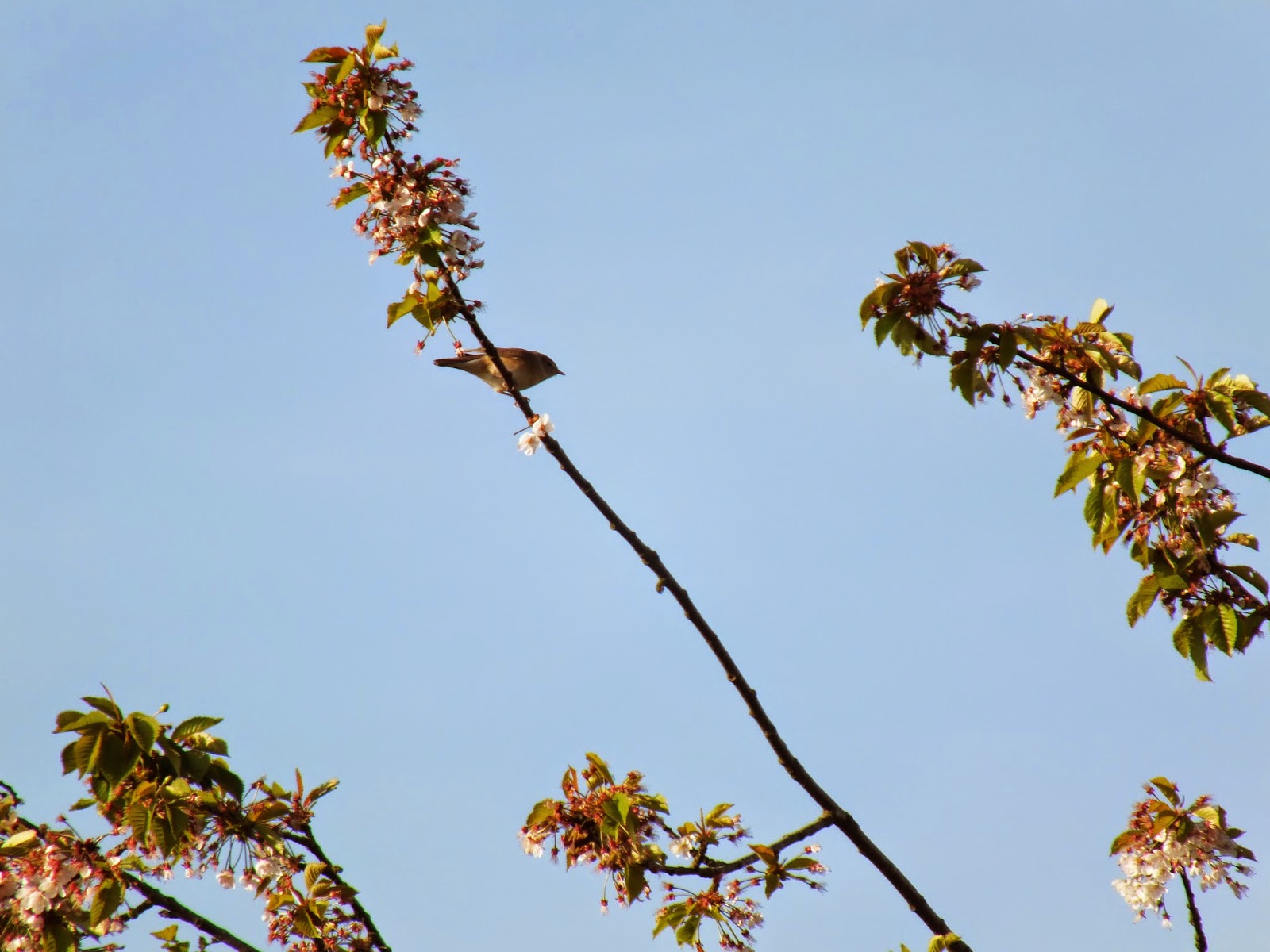 A Willow Warbler singing from the Eastern border
4 singing Common Whitethroat around the Barleyfield and also one still present on Compton Rough. What looked like a pair were in the scrub in the SW corner of the upper playingfields by Meccano Bridge
Adult Mute Swan SW over Meccano Bridge
Grey Heron at Compton Park wetland.
Goldcrest at top of Barleyfield.
2 Stock Dove at Compton Park wetland
3 Swallow low South over the Barleyfield.
A female Sparrowhawk and a Buzzard over the college on the ridge.

As Ian pointed out in his last posting there are a mountain of issues which have petitions. Most of these can be seen on the Twitter feed attached to this blog.

There is one that is really close to home though, which is bound to shock you all!
Please read this article by Patrick Barkham on The Guardian Comment entitled "What do robins, buzzards and badgers have in common? They're all on the Tories' kill list" - speaks for itself really

If you just happen to care for our beautiful robin, which to most is our national bird, then you may just wish to sign this petition to "STOP NATURAL ENGLAND FROM GIVING PEOPLE THE RIGHT TO KILL ROBINS AND DESTROY THEIR NESTS AND EGGS"

Last but not least, and to complete my re acquaintance with the valley I shall be attending the SMESTOW VALLEY ADVISORY GROUP MEETING TONIGHT, and will be providing an update over the next few days. I will also be collating records for the valley now that the transition from paper reporting to online is almost complete. Thank you to all who have submitted records over the past months via e-mail. the year list will get some TLC at the weekend.

Thank you to all blog readers. We have crossed 20,000 page views, which isn't bad after just 17 months!

GREAT TO BE BACK!!
Posted by Chris at 2:59 pm No comments: Links to this post

Our reader may be aware of the catastrophic decline in vulture populations in India.  The cause has been identified as an anti-inflammatory drug used by vetenarians on cattle called diclofenac. It has now been banned over there but unbelievably it has recently been licensed by the EU authorities for use in southern Europe where several, already endangered vulture species breed.
To register your opposition please follow the following link; www.change.org/petitions/european-union-diclofenac-the-vulture-killing-drug-is-now-available-on-eu-market
Whilst on ethical issues, I suspect our reader is already aware of the continuing slaughter of spring migrants in Malta.  Let the Maltese government know why you wont consider going there for a holiday and pressure your newly elected MEPs to challenge the derogation which allows them to shoot turtle doves and ortolans amongst others.
Meanwhile back in the valley things are quietening down altho the willow warbler is still singing forlornly in the barleyfield accompanied by garden warbler. the Little owl is also frequenting castle croft bridge.
Posted by Unknown at 5:34 pm No comments: Links to this post

the swifts are back

round up of other reports for first half of May

Greylag Geese
3 flying SE on 3rd
and today a single flying towards town over Newbridge and then 9 in single file going northwest over wightwick (the seventh bird in the chain was a bit odd).  Suspect6 they may be from the Chillington flock.

Moorhen
today had my first young of the year on canal-3 at wightwick Mill
this is a month earlier than last6 year and two earlier than after the bad winter of 2009.
altho had a week old bird at Perton at end April.

good numbers in southern half of valley

Garden warbler
1 maybe 2 on 10th at smallholdings still there on 15th
Today birds on barley and turners field also smestow bank
Posted by Unknown at 7:22 pm No comments: Links to this post

It's blustery, wet and cool, but worth trying another trip to the valley's northern end to see what, if anything, has touched down on passage.  A pretty poor year so far for migrants, and we're running out of time, for the best weeks in the valley are usually the last in April and the first in May.  So, shoulders hunched, bins covered against the rain, and it's a somewhat squelchy slog under the Jones Road railway viaduct and on to the canal towpath past the last few of the Wolverhampton 21 locks.  Despite the weather there's song from a Song Thrush, three Blackcap, at least four Chiffchaff and churring calls from Whitethroat in brambles and bushes around the sloped grass field leading up to the railway carriageworks.  A male Reed Bunting sings from the edge of thicket and copse close to lock 20,  and nearby a male Greenfinch's weezing notes bring a response from another bird the other side of the canal.  A female Mallard guards her brood of five duckling as they swim in and out of bankside vegetation, a single Swallow skims the surface and flicks back over the hedge towards its racecourse nest site, it seems that's all of note, so back towards the Stafford Road and the car.  It's raining again, brief  squalls ruffling the water, when, just audible, there come scritching, scratching, chattering notes from the base of bushes just below lock 18, the song at first subdued but then increasing in intesity.  Nothing to see at first, but then a movement just above the water line, the shape small, round-tailed and brown-rumped, the broad white stripe above the eye clear against the semi-darkness at the base of the bushes, our first recorded Sedge Warbler for the year, moving among the stems and picking insects from the base of the leaves.  This stretch of the canal has been a favoured by these diminutive migrants for decades, but last year none were reported from anywhere in the valley.  Nowadays they are only with us for a short time, but in the 1990s they nested successfully by the Staffs & Worcs Canal at Wightwick and at Compton, the earliest return date so far being April 15th in 2011.  Today's bird continues to sing sporadically, never ascending more than a few feet above the base of the bushes and eventually disappearing into the gloom.  The weather's lifting somewhat, so let's give the racecourse a go . . .
DUNSTALL PARK,    MONDAY MAY 11th.
It's a story of mystery appearances and disappearances at the Dunstall Park.  Firstly, a mass swan invasion, and secondly, a breeding calamity for geese.  Ten Mute Swan were seen on the lake on May 3rd, and today there are 12.   At least seven are immature birds, and their grouping with a handful of adults suggests families may be involved.  Quite where they have come from is a mystery, and the size of the flock is only equalled by six adults and six youngsters which flew in on November 2nd 2008.  As for the Canada Geese, at least six pairs were sitting on the lake island, but by mid-April all nests were empty.  Quite what forced the birds to quit is a mystery, as there was no sign of broken eggs or of dead goslings.  Weather conditions were not harsh, so some kind of predation may have taken place.  Lesser Black-backed Gulls have almost certainly taken Coot chicks this year, and Mink have been seen along the nearby canals in the past.  The Little Grebe pair are still present, but  no youngsters have been seen, so maybe nesting has failed.  A pair of Barn Swallow appear to be setting up inside the Smestow brook culvert pipe by the lake (a pair nested there in 1998), and at least two pairs are breeding in the stables at the other end of the site.
Recent racecourse records include the Gadwall pair still at the lake on April 26th, a nesting Goldfinch near the parade ring,  a singing Lesser Whitethroat on the western edge on April 26th, a Pheasant calling from the oak copse on April 26th, and a male Wheatear on April 29th.  Elsewhere along the valley,  Geoff reports that a Garden Warbler first heard at the top of the Compton barleyfield on May 4th was still present on 11th,  and Gary Christianson from the Pool Hall lane smallholding reported an Oystercatcher flying low along the canal towards Windmill Lane on May 5th, and a group of Swift moving northwards on May 8th, the first local record this year.
Posted by Unknown at 7:31 pm No comments: Links to this post