Two warbler species, chiffchaff  one in bushes near Meccano Br and blackcap 1♀ in Hanging Grds northern end and a male by the Barleyfield crossings in elder bushes. Again numerous sightings of jay around the Barleyfield probably involving 2-3 birds and one calling by the station. Two green woodpecker flying and calling in the Hanging Grds, one flew across field to Wetland Alders. A nuthatch calling from the eastern border of Barleyfield was unusual. A grey wagtail foraging in the brook by the bridge at Prefabs and a little grebe by the Meccano bridge.

an oversight from yesterday

A confrontation with the Barleyfield fox 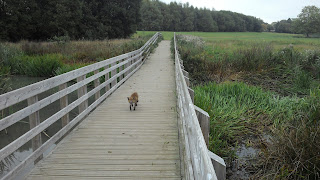